Liassic ammonites of the central Apennines 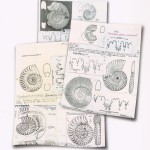 The mounts of the Umbria-Marche Apennines are chiefly formed by calcareous sedimentary rocks representing an incomplete geologic cycle, started about 200 million years ago in the sea of that time, which was the Mediterranean portion of the western Tethys, north of the African continent.
The main geologic structures have a NW-SE orientation and are crossed by rivers (e.g. Candigliano, Bosso, Burano and Sentino torrents, flowing into the Adriatic Sea), which expose mid-late Mesozoic stratified successions on the sides of the valleys. These successions are generally affected by minor tectonic phenomena, and they can be considered a sort of “layer cake” similar to the renowned Grand Canyon of the Colorado in Arizona.
The palaeontologic content of Apennine strata is rich and quite varied: solitary corals, brachiopods, molluscs (bivalves, gastropods, belemnites), echinoderms (crinoids and echinoids), ichnofossils (trails or burrows, footprints, etc.), rare shark teeth. However, ammonites are particularly widespread: their rapid evolution makes them excellent guide fossils, especially for the Jurassic.
The study of their stratigraphical provenance allows comparisons with faunas of Europe and other regions; the resulting underlined similarities and differences are very important for palaeogeographic reconstructions, which are still deficient in many aspects.
Despite the lack of documentation for about 12-15 million years (from Bajocian to Kimmeridgian) mainly affecting sections with reduced thickness, the biostratigraphic researches on our area show that innumerable genera and species followed one another throughout the entire Jurassic.
The present book deals with ammonites lived during the Early Jurassic (Lias), a geologic epoch lasted about 25 million years, which can be divided in the following stages (in chronological order, from oldest to youngest): Hettangian, Sinemurian, Pliensbachian and Toarcian. Further subdivisions also exist; for instance, the upper part of the Sinemurian is sometimes called Lotharingian, whereas the Pliensbachian can be divided into Carixian and Domerian. In any case, except for the Hettangian, which documentation is still scarce in our areas, the other stages are generally well represented by fossils.
Many different ammonites lived during the Lias, and they are traditionally classified into three suborders: Phylloceratina (present from the Triassic to the end of the Mesozoic era), Lytoceratina (known from the Hettangian onwards) and Ammonitina, an artificial group including several superfamilies, sometimes not closely related each other (the non-keeled, evolute, smooth or ribbed Psiloceratoidea of the Hettangian and earliest Sinemurian; the non-keeled, evolute, ribbed and spiny Eoderoceratoidea known from Sinemurian to Toarcian; the keeled, evolute and ribbed Arietitoidea, mainly from the Sinemurian; the keeled, evolute-involute, flexicostate Hildoceratoidea from Pliensbachian to the Middle Jurassic; the keeled or non-keeled, evolute-involute, ribbed and nodose Hammatoceratoidea from Toarcian to Aalenian). Recent researches allowed to modify this taxonomic arrangement, and currently, we prefer to recognize only two major ammonite groups, ranked as orders: Phylloceratida, which includes the classic Phylloceratina, and Psiloceratida, comprising the forms previously placed into Lytoceratina and Ammonitina.

In its present version, this book covers various subjects related with the study of ammonites, such as biostratigraphy, environmental crises and evolution. The updated and codified taxonomic cards of the Apennine genera were originally inspired by the criteria used by Arkell et al. (1957) in their “Treatise on Invertebrate Palaeontology”. For a given genus, each single-page card includes nomenclature data, chronostratigraphic range, character descriptions (whorl section, coiling, ventral area, ornamentation, suture lines), rock and locality provenances of the samples, photographs and/or drawings of the most representative available specimen. More comprehensive cards on families and subfamilies are present as well.
In our opinion, Liassic ammonites of the Mediterranean Tethys are fossils with great potential, since they can help to understand the origin and early evolution of some important taxonomic groups present in other geographic areas. One of the aims of such a work is to facilitate ammonite identification and classification, but an outline of typical themes of our regions is provided too, in order to show their connections with general subjects as palaeogeography. For this purpose, comparisons with data from north-western Europe (the most complete and well known), America and Asia are very useful.